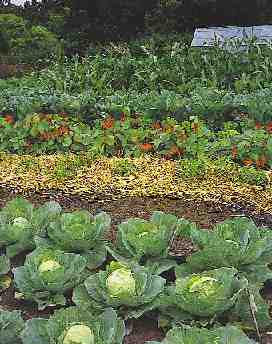 So, when we first started our garden, we had big plans, something along the lines as the picture posted above. Thanks to compostmania.com for the pic.

Well, let's just say that it looks nothing like the above. Nothing at all. We have actually gotten quite a few things these past few weeks, including lettuce and cucumbers, but that seems to be about it for the time being. Ended up taking a few hours to not only weed, but taking out plants that were not producing anything, and looked halfway dead. At this point, we might get a few more things, but next year we will have to plan it out much better.

What's the one thing in your budget that's truly a splurge and you shouldn't do as much and yet you do it anyway? For me, it's definitely going out with friends. We usually make sure to spend under $20, and even will skip drinks and stick to water or coffee so as to savor the food we order. It's a bad habit, but one that I want to continue. Ended up having a great brunch on Saturday at a lovely little cafe that I would never have found if it weren't for my friend who lived around the corner. We were surrounded by brick walls being covered by ivy and flower beds at each and every corner.

One other thing is that with the time that I have thought about is how 'bored' I sometimes feel. It's not really boredom, but just not knowing what to do with all this free time. It's definitely a love-hate relationship. I finally have time to read, crochet, knit, do puzzles, catch up on some tv, and so many more things. It's something that must be battled on a daily basis. That it's okay to not be doing something every single second of the day.

How was your weekend? Do anything fun or something that was much needed?
Posted by Amanda S at 4:32 PM