One thing I've started to appreciate is the ability to visit family and not just spend time but to really enjoy life with them. To share memories, to enjoy the minutes as they pass by. There might even be moments of complete silence, and yet it feels filled with meaning and understanding. Those are the moments that are worth the drive, those small hassels and that inconsiderate (only one right?) driver.

There are a lot of other 'things' in our lives that take priority. For me, work comes first, but what really is the real reason behind working constantly? It's the ability to earn enough money to pay down my debts. To finally have my student loans paid off, to ride around in MY car each and every day.

What made me stop and think about all of this was taking a spur of the moment trip down to see my family. Just one day. And seeing how much fuller life is with my family and friends. That there is so much to do, but is clouded behind debt repayment. Yes, paying off that mountain is important, and even that one extra shift can mean a whole extra payment. But there will always be (for the near future at least) that next payment. And after that, the next savings goal.

But even spending a few hours with family I hadn't seen in years was so rewarding and eye opening, I can't describe it only a few words. There might not be even words. It made me realize how quickly time is passing before my eyes, and that all the money I work for doesn't make up for the quiet moments that passed between us.

So, my hope is that my focus can shift from where I want my life to be in a few years, to enjoying life as it is now. Even if that means my debt repayment plans go by the wayside. Not totally, but just a little bit. Just enough to have a quick lunch with a good friend.

*Time to change that budget again...*

Have you ever rearranged your budget or renovated your goals to fit in sudden inspirations?
Posted by Amanda S at 6:37 PM No comments:

Why I'm Maxing Out My Roth IRA Every Month 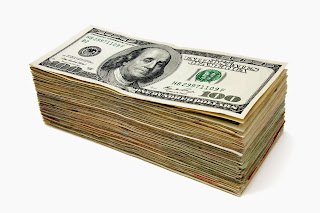 As many of you savvy people out there know, saving for retirement is up there on the to do list, but not really a priority on an everyday to do list. We either have it automatically set up or have no clue what's really going on. Which for 20 - something's is a likely possibility. Who really wants to put money away for a future self you don't know at all?


Even with about 28k of debt (20k of student loans and about 8k left on the car loan), most people would think I would use the $5500 towards either one of my debts and get them wiped out quicker. That does sound financially sound and a great way to use my hard earned money in the short term. But after a lot of thought, I realized there were quite a few positives towards putting that big sum into an IRA each and every year.

It's not something I advocate for everyone, not only because everyone's situation is different but because everyone has different goals that they are trying to achieve. There are many people out there who would find being free from debt would allow them to lead better lives not only now, but in the future. Or some would rather have peace of mind of not being shackled to a creditor sooner rather than later.


Here are my main reasons why devoting that chunk of money a year makes sense to me:

#1: My job does not have a 401k. Yes, it kind of sucks, but a few months after starting my first real world job, I realized I needed to start saving. At the age of 23, I went to my local bank and had them withdraw a certain amount every week. It got me into the habit of not spending those $100 because they would never be seen. One day when I do have a job with a 401k, the extra amount taken out of my paycheck will be nothing to worry about because I've already become accustomed to living with less.

#2: Now is the time for saving and compound interest. THESE ARE THE YEARS! Not just for fun and having the time of our life, but for compound interest to take into effect. During these early years, those small pennies those first few dollars earn can turn into hundreds decades later. And not to sound greedy, but lots of money later on sounds pretty nice to me.

#3: It probably would have been going to things other than debt... Like dinners out, or fancy face creams that make my skin look like I never ever worry about anything... An extra $400 a month seems like a lot, but when its in your hands, it looks like the best night out since graduation.


I'm lucky to be able to allocate such a large amount of my income every month towards my goals and paying off my debt. But forcing myself at this moment to slowly but surely pay off my debt while funding my IRA is reinforcing my patience towards financial freedom. My small salary today will not wipe away all my debts, but in the long haul, it will make a considerable dent in the mountain. But along with that, each dollar saved right now, will be quite a few more later on.

What are your thoughts?
Posted by Amanda S at 3:11 PM No comments: