Hey you guys! I know this is a bit late, but hey, better late than never, right?

So here it is! The spreadsheet of death! Or better known as the monthly expenses... 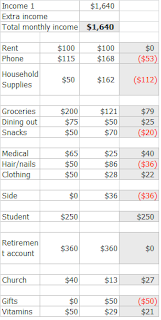 Because this is my first one, and will set a precedent (well hopefully) for the following months, I want to make sure to go line by line.

Rent: The house we live in is paid for and so, the only thing we pay on a yearly basis is taxes. The reason I call this rent is that I give my bf $100 a month to cover some of the living expenses that are under his name (water, electricity, etc.)

Phone: The cellphone bill. This is actually for both my mom and I, where I pay every month, and every couple of months, my mom writes a check out for her portion. Usually it's much lower than this, but last month my phone was stolen (sad, sad day...) so I had to pay an activation fee.

Supplies: This category can vary from month to month, but it's usually steady. This month unfortunately, we had a ton of things to get. This included going to BJ's and getting large amounts of pet food.

Groceries: My bf and I split the grocery bill in half. He is a big meat eater, while I have a special diet that requires me to not only make a lot of meals of home, but by food that is usually a bit more expensive. It's something I've come to terms with both emotionally and financially.

Dining Out: This expense is mainly when I'm going out with friends. When my bf and I go out together, he pays for it because his income is substantially higher than mine. Because my friends are in the same boat as I, we usually are able to come up with something meaningful on the cheap.

Snacks: Because I work in the mall, and along with that have a really long commute, I tend to snack while waiting for the bus or a ride home. It can get really bad at times, especially if the day has been long or had to deal with a lot of tough customers. A tea here or a latte there, it really does add up, as you can see!

Medical: Forgot that this co-pay was due...

Hair/nails: For some reason I always put nails, but I've never done anything to them, except paint them myself. But I do get my hair done, due to it being of an unruly nature on an everyday basis. Unfortunately, it costs me a bit of money, but it's not something that gets done that often.

Clothing: Whatever suits my fancy! So, not really, but if there is something on sale and it catches my eye, you know I'm going to buy it! This time it was some shorts and shirts for lounging around.

Side: So, I have a side hustle that I was really into a few months back, but kind of fell away from. So I'm going to start it over again. This amount is to start myself over again!

Student: My student loans! My favorite thing to pay back! Because it happened to be in the middle of the consolidation, I wasn't able to pay anything because I totally forgot to take care of it earlier in the month...Oh well, I'll make sure to be intense these next few months!

IRA: Because I'm worried about retirement and my employer does not have a 401k, well, a Roth IRA is better than nothing! The reason why I do contribute so much is that I hope that feeling the squeeze right now will make it easier later on in life to contribute even more.

Church: That did not go as well as I had planned. Hopefully August is better...However, we did end up donating quite a few things to the food pantry and school supplies.

Gifts: Had two unexpected events that I was invited to last minute. Usually I am able to plan for these, but I was able to come up with something thoughtful both times.

Vitamins: As a waitress, I usually don't get breaks and tend to skip meals. So, not only do I buy multivitamins, but protein shakes to make sure that I am getting the proper nutrients.

Disclaimer 1: There is no transportation costs due to the fact I do not really pay for it. I take the bus everywhere, and the bus is free for me, and along with that the bf drives me wherever if necessary, but we do most things together anyway.

Disclaimer 2: We don't pay for cable/television/home phone because of bf's job. It covers all those expenses as long as he works there, so it's something we don't have to worry about for now or the near future.

Something I have been considering is the purchase of a vehicle to get me to and from work. At this current moment, my bus ride is pretty long, between one and two hours, which would normally take 25 minutes by car. With that, the winters in the area can be, and are pretty intense. The reason I've held back is the extra money has been going towards savings/IRA/student loans. But it is a possibility so stay tuned!!!

Please don't be shy (I know some of you aren't) but what are your opinions? It would be awesome to hear what you think after seeing a breakdown of my monthly expenses and your ideas on the areas that can be fixed!
Posted by Amanda S at 7:25 AM